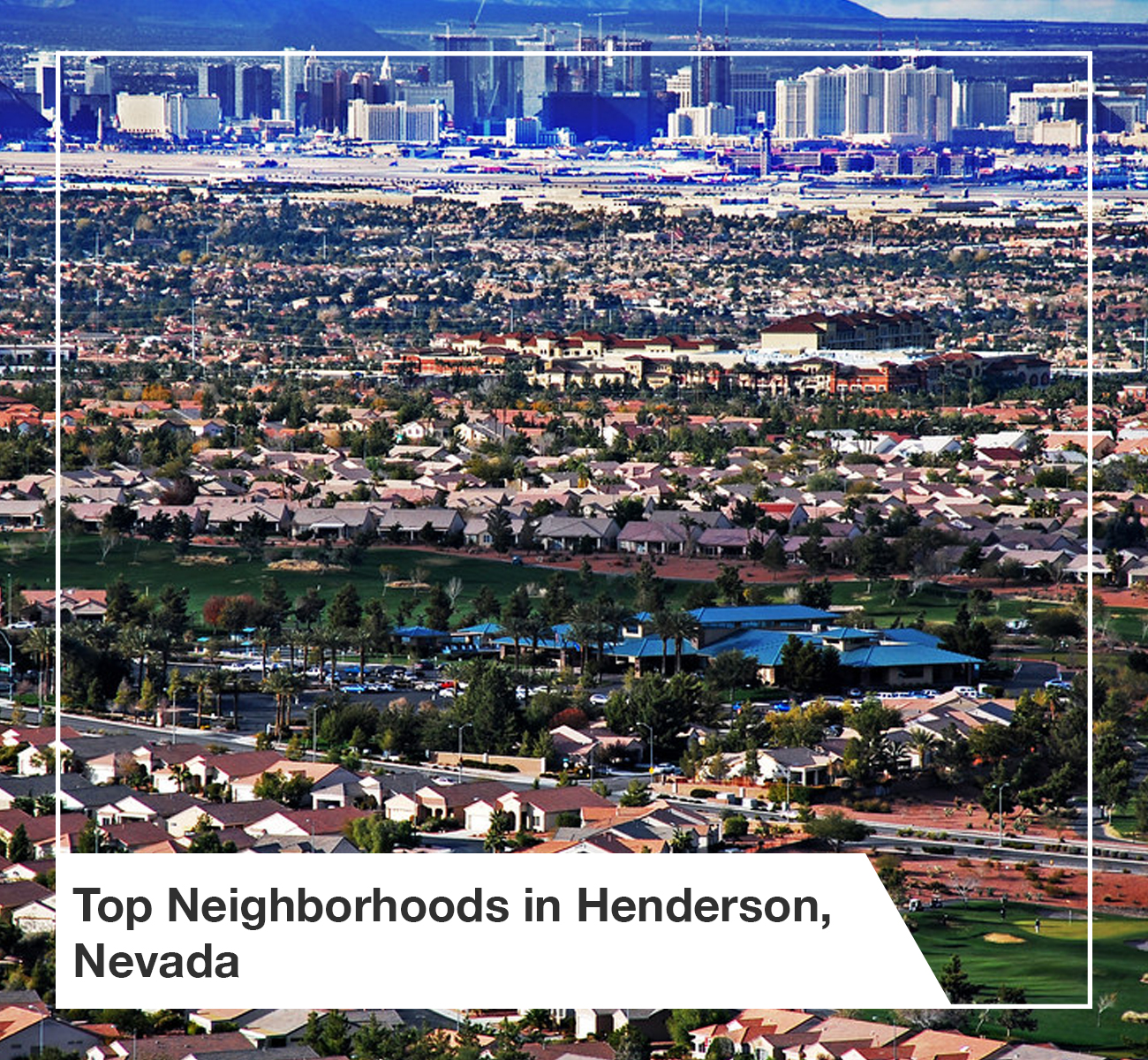 Why Move to Henderson, NV?

Time for a move? Not a fan of snow and sub-zero temperatures? Looking to move into a community that is concerned about the environment? Is diversity important to you? Are you considering the beautiful state of Nevada (which has no state tax)? Moving to Henderson, NV, may be ideal. After all, the city slogan is “A Place to Call Home.”

Located on the southern rim of the Las Vegas Valley, Henderson is a community of approximately 300,000 people in 105 square miles with 37 miles of hiking trails. And when walking is not convenient, know that it takes only 45 minutes to drive from one end of the valley to the other. Some of the best neighborhoods in Henderson, NV, have everything you need in close proximity, but even those that don’t are a short car ride away from stores, restaurants, and other amenities.

Home to almost 70 parks and excellent schools, Henderson is a great place to raise a family. You can enjoy everything from birdwatching at the Henderson Bird Viewing Preserve to taking in the natural beauty of living in Henderson, NV, at the Whitney Mesa Nature Preserve to BMXing at the Arroyo Grande Pump Track & BMX Dirt Jump Park or the Whitney Mesa BMX Track. And “man’s best friend” also has lots of room to run in the city’s numerous dog parks.

You won’t have to worry about snow or rain spoiling your time outdoors. Henderson has virtually no snowfall and an average of 292 sunny days annually. Temperatures do vary throughout the year, however, from the low 40s in December to approximately 100 degrees in July. When considering moving to Henderson, NV, you will want to take into account that it is extremely hot for much of the year.

When the days are too hot (or too cold) to spend extended periods outside, you can check out one the approximately half dozen rec centers in the city, from the Black Mountain Recreation Center to the Henderson Multigenerational Center and Aquatic Complex to the Whitney Ranch Recreation Center. (These centers include outdoor facilities as well.)

There are two seniors’ centers in Henderson, the Downtown Senior Center and the Heritage Park Senior Facility, which includes indoor aquatic amenities for residents of all ages. Plus, with access to hospitals and other healthcare services in the city, when living in Henderson, you won’t have to worry about accessing the help you need for family members of all ages should the need arise.

Speaking of family, Henderson is home to many schools. As well as public schools, there are more than 20 charter and private schools for students in Kindergarten through Grade 12. Colleges and universities include the College of Southern Nevada; Nevada State College; and the University of Nevada, Las Vegas; as well as a number of private post secondary institutions. Henderson is also home to several technical colleges as well.

While you might think that Henderson, being in a desert, would have exceptionally high water costs, this is not the case. The cost of electricity, on the other hand, can be quite high—especially in the summer. Of course, it all depends on how hot you like to keep your home. Plus, for your convenience and easier budgeting, equalized payment plans are available.

Other costs are on the high end as well. According to bestplace[dot]net, the cost of living in Henderson is 17 percent higher than the US average. The average monthly rental cost is slightly higher than the national average as well. But when contemplating moving to Henderson, NV, you must weigh the advantages versus the cost. You just may find it’s well worth it. Just ask residents who originally considered moving to Henderson, NV, as merely “a stop along the way,” fell in love, and decided to stay.

So, whether you prefer to live in an area of the city with an HOA (homeowners’ association) or one without, one with lots of mature trees and lush green landscape or one where desert landscaping is predominant (something for which homeowners are offered an incentive, keeping water conservation in mind), here is a little bit about eight of the best Henderson neighborhoods.

Eight of the Best Neighborhoods in Henderson, NV

Green Valley Ranch is conveniently located. It’s a quiet neighborhood, a plus for its residents, but it is just off Interstate 215, making access to the surrounding area easy. The McCarran International Airport is only a nine-minute car ride away. And the Las Vegas Strip? Only 12 minutes away.

Almost 70,000 people call Westgate their home. While still a suburban community, it is more densely populated than Green Valley Ranch. Most residents are homeowners, and the public schools are above average. Not only do families with school-aged children live in Westgate but also many retirees as well. According to niche[dot]com, Westgate is ranked #2 of best Henderson neighborhoods to live in and raise a family.  Niche also reports that the community has been ranked #4 for young professionals.

Whether you’re a young professional, a retiree, or the parent of school-aged children, if you want to get some fresh air and exercise, you can visit one of the beautiful parks in Westgate. Want to catch up with a friend? Why not visit one of the local coffee shops? Looking for more substantial fare? From sushi to BBQ to vegan fare, you’ll find a restaurant that is sure to be a hit.

As is the norm in Henderson, the public schools are ranked above average. Plus, you (and your family) can enjoy the outdoors in the many parks in Green Valley South. (It is the city planners’ goal to ensure that no resident is more than a 10-minute walk from a local park.)

You can grab coffee or a meal at one of the coffee shops or restaurants in the community. If you’re a golfer, you will be interested to know that the Legacy Golf Course is a central feature of Green Valley South. From the spectacular mountain view to the many places of worship to the convenience of being only 12 minutes from the Las Vegas strip… No wonder Green Valley South is among the best Henderson neighborhoods.

Green Valley North is another Henderson neighborhood with a dense suburban feel. Its 50,000+ residents enjoy the many restaurants, coffee shops, and parks in their mature community with its tree-lined streets. Although Green Valley North is often overlooked because of the older homes, it has its advantages, including larger homes with lots of character on larger lots.

Property costs range from $130,000 condos to $1,000,000 homes. And because most of the residences are not governed by an HOA, short-term rentals, such as Airbnbs, are permitted. While Green Valley North is a little farther from the main beltways, it has lots of shops and eateries. Plus, Green Valley High School is ranked #2 in all of Clark County, a definite drawing card if you have teenagers. You’ll find many plusses in Green Valley North, one of the best neighborhoods in Henderson, NV.

Unlike Green Valley North and Westgate, MacDonald Ranch is a sparsely populated suburb of Henderson. Many of the approximately 22,000 residents are retirees. This quiet community is nestled amongst the McCullough Mountains and has easy access to all Las Vegas has to offer, being just minutes from Interstate 215. Green Valley Ranch and all its amenities, as well as the McCarran Airport, are also nearby.

The mountains are a favorite destination for those who want to explore the trails and enjoy the breathtaking views. And if you prefer more structured opportunities, you can play a round of golf or enjoy other activities at the Desert Willow Golf Course and Community Center.

Slightly less populous that MacDonald Ranch, McCullough Hills has a population just over 20,000. It, too, is considered one of the best neighborhoods in Henderson, NV. As is the case in all of these communities, most residents own their own homes. McCullough Hills, like Green Valley South and others, has a dense suburban feel. Families and young professionals enjoy the numerous parks in McCullough Hills. And if you’re into mountain biking, you’ve come to the right place.

Another suburban community, Gibson Springs has a population of approximately 21,000. Unlike other Henderson neighborhoods, most residents rent their homes, making it a great option for young professionals just getting started. Like other neighborhoods in the city, there are lots of parks and the schools are ranked above the national average.

Of Trulia users who voted, 77 percent of them said they felt safe to walk alone at night. This is reassuring for those who want to enjoy dinner at one of the many restaurants in Gibson Springs. And if you’re looking to grab a coffee or dessert, they’ve got you covered in that respect as well. 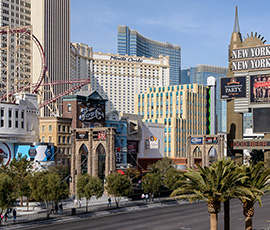 #1 Guide to the Best Neighborhoods in Las Vegas

Looking for your first home in Henderson? Gibson Springs may be just what you’re looking for.

Anthem Coventry has a vast number of walking trails and large green areas. Anthem Highlands is the most affordable part of Anthem and is secluded and quiet. Sun City Anthem was ranked the #4 retirement community by 55places[dot]com. This community with affordable, one-story houses with incredible views is home to older individuals who are still extremely active, many of whom make use of the Sun City Anthem Clubhouse, the hub of numerous activities from pickleball to quilting and much more. For retirees looking for a smaller, quieter community with less expensive housing, Solera is a great option.

And on the other end of the scale, Anthem Country Club has some double guard-gated communities with homes as expensive as $12,000,000. If you’re a golfer, you will also want to look into the exclusive club. Looking for luxury? Anthem Country Club is worth investigating.

These communities, among many others, make Henderson, NV, worth considering when it’s time for you to relocate.

We want to be your trusted advisors when it comes to Las Vegas real estate. By “Providing ‘YOU-Centric’ Real Estate Services”, you can count on The Keays Group to show you ALL of your options when buying or selling in Las Vegas, Summerlin, Mountain's Edge or Henderson.