Moving To Henderson, NV? Here’s What It Will Cost To Live Here In 2022 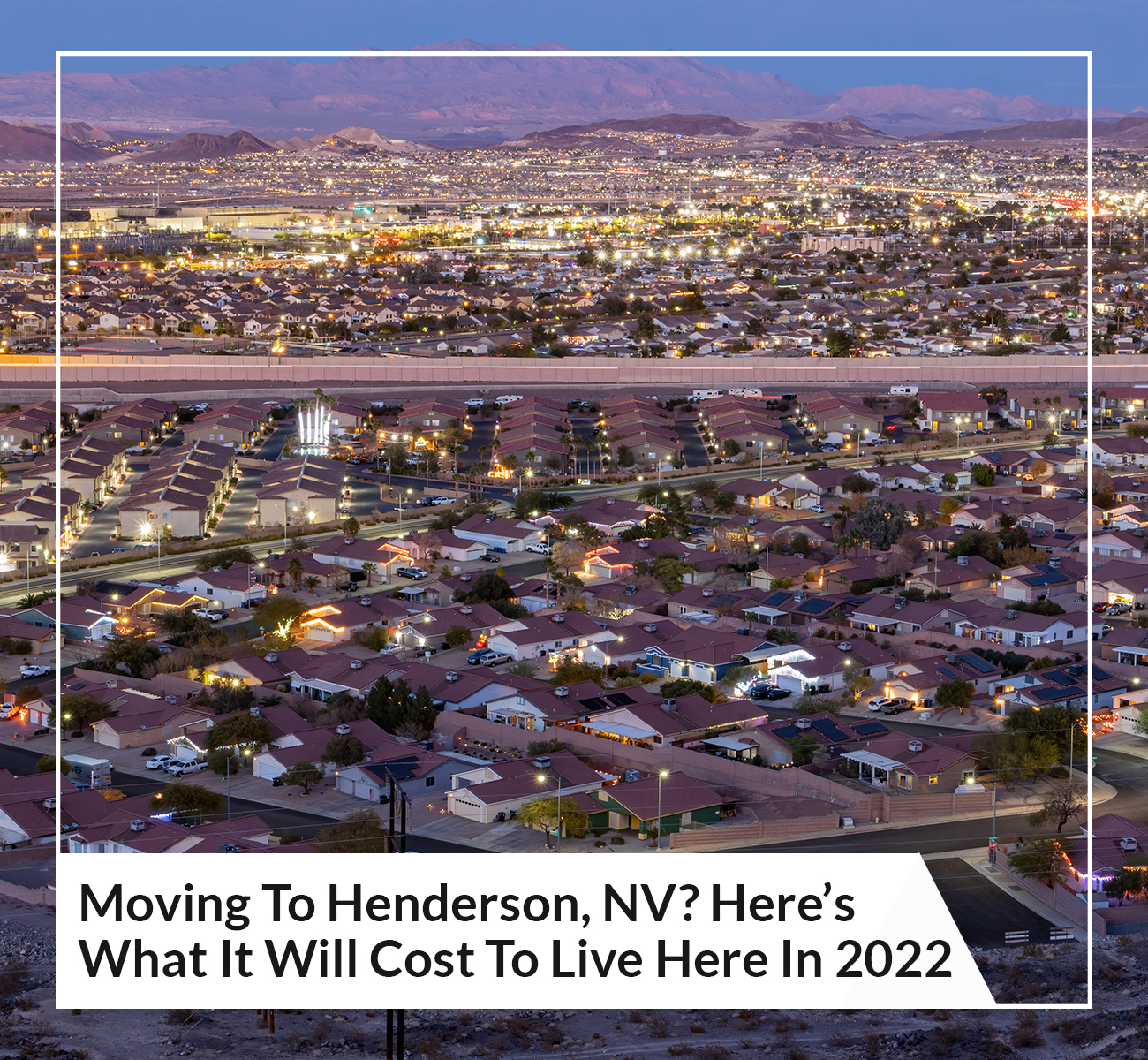 Moving house is often described as one of the most stressful things a person can do. Aside from the logistics of getting all your possessions (and yourself!) from A to B, there’s also a whole lot of stress that comes solely when you’re moving into a new place.

One particular source of concern for people moving into a new home is their location. Of course, you should always do your due diligence when choosing a new location to live, but there are still going to be some last-minute doubts like what is there to do in this area?

Most importantly of all, how much is it going to cost to live here? Certain areas are more expensive than others, and that can make a significant impact on a household’s finances.

So, if you’re planning on living in Henderson, Nevada, where does this area fall in terms of affordability? How much does it cost to live here, and what should you know about the area? Let’s find out!

What You’ll Find In Henderson, NV

Henderson is the second-largest city in Nevada, coming second only to the famous Las Vegas. In fact, it’s only 16 miles away from Las Vegas itself.

Since Henderson is so close to Las Vegas, it’s naturally a growing suburb. There are plenty of stores, malls, local parks, restaurants, and overall plenty of things to do. It’s an ideal place for a family or for a professional couple. Commuting to the nearby Las Vegas is surprisingly quick and easy, and allows you to live away from the hustle and chaos of a crowded city.

Cost Of Moving to Henderson, NV

The number-one cost most people consider before moving to any area is: how much will it cost to live here? Are there any hidden expenses I should know about?

Let’s go through a few handy facts about the cost of living in Henderson, NV.

The main increases in expense are from the basics: housing, transportation, and food. If you plan to move to Henderson, make sure you can afford it.

However, the minimum wage in Nevada is $9.75 an hour, in comparison with the national federal wage of $7.25 per hour. This means that if you’re planning to pick up a new job when you get to Henderson, you could be getting paid more for your work than in other places in the US.

Housing prices in Henderson are consistently going up. That’s great news for sellers, but not so much for buyers! According to some studies as of May 2022, the average house price in Henderson, Nevada, is $525 000. This means that living in Henderson, NV, can cost a little more than you might have expected.

Like everything else in Henderson, Nevada, renting a home can be a little more expensive than the national average. You could be looking at around $1739 on average, for a 989-square-foot apartment (as of May 2022). This figure can differ depending on location, size, and other factors.

Overall, the cost of living Henderson, NV is going to cost more than living somewhere else in the US. However, this figure can depend on where you live, what job you have, and the size of your family.

Be sure to take this into account when you’re crunching the numbers for your move. Everyday essentials like food will cost more, and so will transport and other living costs.

Why Move to Henderson, NV?

So, why should you consider moving to Henderson? Let’s take a look at some benefits of living in this beautiful, fast-growing town.

One thing Henderson can certainly offer is convenience. Like any other town set close to a much larger metropolis, commuting into Las Vegas from Henderson is relatively easy.

There are also plenty of stores, malls, restaurants, and things to do in Henderson itself. Due to its proximity to Las Vegas, Henderson is growing quickly, meaning that there’ll be new things to do and more opportunities as time goes on.

If you’re looking for entertainment in Henderson, you’ve come to the right place. You’ll find concerts, casinos, movie theaters, and even the famous Shakespeare in the Park celebration.

All in all, Henderson is a place of impressive culture - and you’ll never be bored, that’s for sure!

Henderson, NV has a desert climate, meaning it’s hot for most of the year. If you can’t stand the cold weather, maybe Henderson is the place for you - they have hot summers and very mild winters. You’ll find some breathtaking mountain ranges nearby, as well as some truly spectacular walking trails.

If you plan to go walking in Henderson, make sure you’re prepared for the heat. Start with easy walks to build up your stamina, even if you’re an experienced hiker. Always make sure you have plenty of water and sun protection!

A top concern for a family moving to Henderson will be that of schools. Since Henderson is a largeish town that’s only getting larger, you’ll find some of the best private schools in Henderson NV, as well as plenty of fantastic public schools.

Is Henderson, NV Right For You?

So, should you move to Henderson, NV? There are plenty of things to weigh.

First and foremost, consider the cost. Life in Henderson can be more expensive than in other locations in the US, and in 2022, conditions are constantly changing. Depending on whether or not you have a job lined up in Henderson, you may want to consider your finances to check that you really can afford to live in Henderson.

Next, you’ll need to pick your location. Some areas of Henderson will naturally cost more, and in the long term, renting may work out more expensive than buying a house - if you’re able to buy. You’ll also need to consider practicalities - how close is to work, schools, transport, etc.

Last but certainly not least, you’ll need to consider whether you can handle the climate. Perhaps you’re used to arid desert areas, in which case Henderson probably won’t be too much of an adjustment. However, living in a hot, desert area can take a serious toll on your health if you don’t know how to properly manage the heat.

Just like with any other big move, you need to take your time, do your research, and weigh the facts. Try and visit the area you plan to move to if you can. Several visits are ideal so that you can get a good idea of what sort of place you’re planning to move to.

We want to be your trusted advisors when it comes to Las Vegas real estate. By “Providing ‘YOU-Centric’ Real Estate Services”, you can count on The Keays Group to show you ALL of your options when buying or selling in Las Vegas, Summerlin, Mountain's Edge, or Henderson.